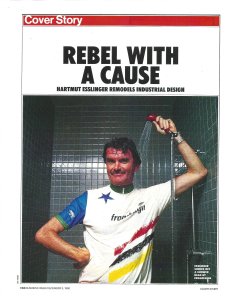 [founder of frogdesign c.e.o. hartmut esslinger demonstrating how wet a design leader can get by spraying hiumself with california optimism and german determination, businessweek, 03 december 1990]

Memories are never simple—as authors as different as Marcel Proust, James Joyce, Primo Levi, and Dave Eggers have shown in their writing—but The Professor’s aim here is somewhat different: to reveal the essence of a man through a single, relatively simple memory.

The story behind that memory begins when The Professor took his first trip to Germany in the autumn of 1992 to rendezvous with the founder of frogdesign: Hartmut Esslinger. The Professor had been working at frogdesign for only a matter of weeks [after graduating from Stanford’s product design program] but he’d already known Hartmut for years. Back in the mid-1980s, Hartmut was already a well-known figure in the global industrial design community, most notably for the ground-breaking and user-friendly PCs for Apple [among many other projects]. Hartmut had bonded directly with Steve Jobs over their shared pursuit of exemplary process and manufacturing excellence [what today we would call “industrial craft“].

That connection with Jobs began in 1982 when frog won the first annual design contract worth over one million dollars in Silicon Valley history [$2M actually] to provide Apple with design leadership for current computers and future concepts. When Jobs was summarily fired from Apple in 1985, Hartmut followed him to NeXT Computers. The ensuing few years were prolific for frog: highlights included opening the first frog office in Tokyo; a workstation for Sun Microsystems and for NeXT; optical products for Olympus; motors for GE; consumer electronics for Samsung; pro bono home projects for the aging with the Helen Hamlyn Foundation; metalware for Alessi and Fissler;  cookware for Rosenthal; and the n-Cube supercomputer.

As 1990 began, Hartmut’s influence was still on the ascent, and as that year ended, it was none other than a leather-jacketed, frog-designed, motorcycle-striding Hartmut Esslinger who became the first designer to ever grace the cover of BusinessWeek [the 03 December issue].* He also became the first—and probably the last cover-story subject—to pose in the shower [wearing the jersey of the Germany-based bicycle team that frog co-sponsored] while simultaneously soaking himself with a hansgrohe hand-held shower head that his team had designed. The Professor recalls former design director at frog Stephen Peart—a legend in his own right—saying that, with those pictures, he was sure that Hartmut had finally lost it. The Professor recalls thinking “Yeah, Hartmut’s crazy—crazy like a fox.”

To state the obvious, seeing Hartmut at his office-home in Altensteig was a big deal. At a certain point on the first weekend, The Professor recalls Hartmut asking if he was hungry. The Professor said yes, but rather than race off in the 911 parked out front, Hartmut surprised The Professor. He grabbed a loaf of bread, a big bottle of Evian®, several fresh and beautiful red tomatoes, salt, and a chunk of cheese. Declaring it a gorgeous day, he led The Professor outside to a small table. There, with a shared knife and cutting board, they communed with nature and with each other; amidst the small-talk they shared some big ideas about Francois Lyotard and the postmodern condition, about what The Professor termed “post-credible culture,” and Kenichi Ohmae’s latest thoughts on the economic triad of America, Europe and Japan.

That experience was the essence of Hartmut, in his element and completely at ease; he wore Levis®, a t-shirt and Birkenstocks®. A slender Tesla-coil of a man, brimming with the urgent urge to do things that matter, was nonetheless a challenge to spend extended time with. Being with him was intense and demanding, and Hartmut didn’t let up or blink; his hair and fingertips crackled palpably from what seemed to be excess energy draining from his extremities. Being in his presence was to experience a subtle but undeniable change in atmosphere, as if the micro-weather around him was different from everywhere else.

In that moment sitting outside Hartmut’s home, The Professor realized that Hartmut could have been taking his sup at any number of luxe restaurants in any number of global hotspots. But it was clear he’d rather be at home, sitting outside, eating simple local food, in search of genuine moments of communion where he could learn, grow and change. After returning to California, The Professor recognized that Hartmut was fearless in that way. He was forever in search of a better way of doing things, including having conversations. Twenty-two years later, The Professor still remembers that trip to Germany, most notably that mid-afternoon lunch where he was with a focused but unfiltered Hartmut Esslinger.

Hartmut’s still interacting and inspiring colleagues today: he’s mostly hale and hearty, full of vitality and eager to show that what design offers [in the most expanded sense possible] can improve the human condition. Since leaving frogdesign, he has been teaching young design students in Shanghai and Vienna so that he can share his mission for design; writing a book every year or two [including Design Forward and A Fine Line]; and taking the occasional consulting gig. But beyond all that credentialism and fame, the thing you really need to know about Hartmut—going all of the way back to that first outdoor lunch in Altensteig, Germany—is that, yeah, he’s the real deal, and that like Antoine de Saint-Exupery [one of his heroes], he believes that “it is only with the heart that one can see rightly, [because] what is essential is invisible to the eye”—and that’s also the essence of why they call me The Professor.

* n.b. On 31 October 1949, Raymond Loewy—arguably the [grand]father of the entire industrial design profession—was featured on the cover of Time magazine; besides Hartmut, he is the only other designer that The Professor is aware of to appear on the cover of a general-interest consumer publication.