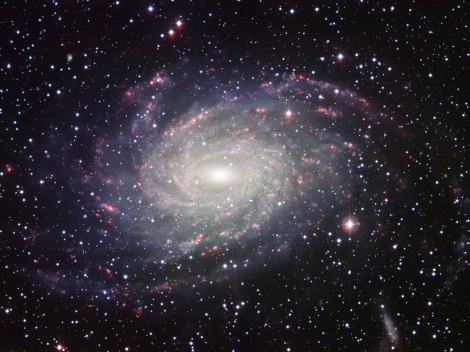 [somewhere out there, The Professor is not only professing the lessons of design but also zeroing-in on what the future of the design profession might encompass]

NOTE: The following article contains the first usage of the term “designer-hackers” that The Professor is aware of—a phrase that since The Professor first used it [see point 03 below] has become far more common in the creative community.

In the Autumn of 1990, The Professor was wrestling with a hard fact of family life. His brother had joined the Army months earlier and had since been to Iraq as part of the first American military incursions. It was a source of stress for The Professor. There he was studying under the palm trees and cycling everyday in the year-round temperate weather of graduate school at Stanford while his younger brother—the kid who signed-up for service to straighten out his jagged-up life as much as to be a soldier—was on the front line in a warring and factionalized Muslim country. It was a bad time to be almost anywhere in the Middle East, but being in Iraq was probably the epicenter.
To counter his what-the-hell-am-I-doing-here-at-Stanford feelings, The Professor left the Design Loft—the studio shared by the grad students who were undertaking their Thesis projects—and turned to drawing and painting; he practically became a resident at the school’s printmaking studio. He painted on copies of the Stanford Daily newspaper; all taken from the same date, and all with the same boldfaced headline “US DECLARES WAR.” The Professor—essentially unschooled as a painter—began to render camouflage, map imagery, targets and explosion-like patterns atop first page after first page of the paper. The Professor also learned to do monotype prints, and once he had the press technique dialed in, he experimented using photocopied images from newspapers, spray paint, tempera, acrylic paint, and dry pastels in various combinations.
The Professor also started to seriously wonder what “design” was good for—what it would take for design not simply to succeed but to matter in a broader sense: to be more of a cultural force for societal progress than a recipe for business success. Originally, this took the form of a screed, a cry in his darkest darkness to justify what he was doing.What resulted was three pages of MacWord bullet-points that focused on when design matters, now but especially in the future; this became a more developed and formal document “When Design Matters” that he soon shared with frog’s founder Hartmut Esslinger. Hartmut was excited by the fresh thinking and found that it meshed in several specific ways with thoughts that he had previously had. Serendipitously, Hartmut was asked soon thereafter to speak by the Netherlands-based lighting company Lumiance. The first lecture was entirely Hartmut’s and he devoted it to detailing the meaning[s] of frog’s already-famous credo [at least in the industrial design community] of “Form Follows Emotion.” The second lecture, and the one to which The Professor contributed greatly, was the “Vision” section about where the profession [and culture] of design was going [or ought to be going]. It was opinionated and unlike any other design lectures or conferences of the time that The Professor was aware of; subsequently it was printed in a 48-page limited-run of 1500 copies, spiral-bound.

[the cover of the 48-page lumiance lecture book of 1992, courtesy hartmut esslinger]

Not all of these 19 proposals have yet reached fruition or found expression in the greatly expanded field of design of 2014 but the essential rightness of their key points rings true even today, and that’s why they call me, and continue to call me, The Professor.