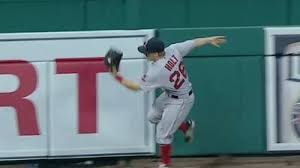 Here we are at the halfway point [81 games] of the 2014 Major League baseball season, a reasonable time for The Professor to take stock of where the Boston Red Sox are at. Coming off of their World Series victory of 2013, this season’s team was in large part the same one that shocked fans and analysts alike last year with clutch hitting, beard pulling and a penchant for late-inning dramatics. But with a 37-44 W/L record [the kind of record they haven’t had since 1997], they sit uneasily in 4th place in a 5-team division.

Still, The Professor is not so much about the standings as he is about the quality of their play. Things have been decent enough with respect to the pitching and fielding but a down, way-down season for almost everyone on the offense. Dustin Pedroia, Daniel Nava, Jonny Gomes, Xander Bogaerts, Jackie Bradley, Jr. Stephen Drew and AJ Pierzynski are all having off years; the only two players having decent seasons so far are David Ortiz [decent power numbers but losing way too many hits to the defensive shifts used against him] and Mike Napoli [decent batting average but low HR/RBI totals and many strikeouts]. In less than a year’s time, the Sox have gone from the top to the bottom in offense-based stats [such as having the league’s lowest RISP, batting for a base hit with runners in scoring position].

But then there’s rookie Brock Wyatt Holt [BWH]. He’s the feel-good story of the Red Sox half-season. Just a few months back, he was the warm body thrown-in by Pittsburgh to accompany the 2013 trade for the player the Sox really wanted [relief pitcher Joel Hanrahan, who lasted all of 7 innings in his Red Sox career], BWH wasn’t even playing regularly until the end of May when injuries to Shane Victorino, Will Middlebrooks and Mike Carp created what has come to be a perpetual opening.

In a mere month, a lot has changed; NESN announcers Don Orsillo and Jerry Remy now refer to “the growing legend of Brock Holt” as BWH has made some out-of-the-blue, web-gem level catches playing LF, CF and RF after first starting at 3B [and being an infielder his whole career]. BWH is also hitting for a .321 batting average, the only starting Sox player over .300, and his success has led manager John Farrell to put him into the lead-off spot [where the Sox had tried multiple players to no avail this season].

But the legend of BWH goes beyond the numbers. In his first game in the outfield, he caught a long-drive, rolling and turning along the LF fence as he did so; in another game, playing CF, he flew in out of nowhere, and when everyone else lost track of the ball, executed a tumbling, didn’t-see-that-coming catch; and, in a most recent game playing RF, he raced in on a screaming line-drive, leaped forward toward the ball, went airborne and fully laid-out to snare the drive an inch or so above the grass. The Professor asks: Who does that?

A month ago, no one knew the answer to that question. Now BWH has shown some of what he can do, and that is to epitomize the kind of player that Boston fans love to root for: a scrappy, large-hearted, hustling, hope-generating, never-give-up type who consistently plays at, or above, his own abilities. Second baseman Dustin Pedroia used to own that territory but since he won Rookie of the Year and an MVP award [as well as a couple of World Series rings], he’s too well-known and too much of a target for opposing teams. BWH will never be Petey or replace him but seeing BWH this season is like seeing Petey in 2007 before it all went right for him. With Holt, you get that purity of purpose; he appears to play for the sake of playing, unencumbered by the baggage of success. He may still stall this year, end up in Rhode Island, or have his production drop inexplicably. But for the last month, Holt has been a phenomenon, an experience to treasure because he has redefined beauty and performance on the baseball diamond, something any fan should be able to appreciate and learn from—and that’s why they call me The Professor.
©2014